The central part of the camp compromises a big tent with bar, lounge, library and dining area. A second lounge and the swimmingpool area are located on either side of the main building. The fire pit in front of camp is the meeting point for pre-dinner drinks and early breakfasts.

The camp has views north towards the Hoanib river and is flanked east and west by rugged hills. The camp looks out onto a small waterhole that is often visited by elephant, oryx and other mammals.

Location
The camp was built close to the Hoanib River, in a remote part of the Kaokoveld bordering the Palmwag Concession to the north. It is part of the Kaokoveld, a land of rugged scenery, mountains, vast plains, and dry riverbeds inhabited by incredible desert-adapted plant and animal life.

The Hoanib river remains dry for most time of the year. However, once the first rains fall, usually not before November, the Hoanib can temporarily turn into a wild river.

Wildlife
The Hoanib is known to be one of the best wildlife areas in Namibia outside Etosha National Park. Giraffes and Oryx are often seen. Desert adapted elephants search the river beds for water, usually the big bulls but entire elephant herds are seen as well. Cheetahs are also present and the elusive brown hyenas frequent the area too.

The rare desert lions are also roaming the area. These wonderful animals are closely monitored and protected by Dr. Philip (Flip) Stander, a well know researcher who is based at Hoanib Skeleton Coast camp. His studies are supported by Wilderness Safaris. More information can be found here: http://www.desertlion.info

Activities
Activities include game drives and walking. Activities access the game rich riverbed (elephant, giraffe, lion, oryx), and the plains, river valleys and hillsides to the south where mountain zebra and sometimes one of the rare rhino can be found.

A 3-nights stay includes a trip to the Atlantic Ocean. It is mostly conducted as a scenic drive in the Hoanib riverbed to the coast combined with a flight back to camp, showcasing the dramatic landscape from the air. Once you arrive at Moewe Bay, a tiny ranger post within the National Park, you will be driven to an impressive seal colony and then either to view an old shipwreck or south to Hoanib Mouth and Klein Oase. Lunch will be served on a beautiful spot along the coast.

Your return flight will take you across the dune fields towards the springs of Auses and along the Hoanib valley back to camp.

Good to know
The camp is powered by solar energy. 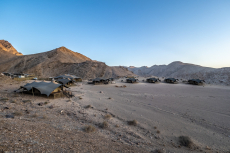 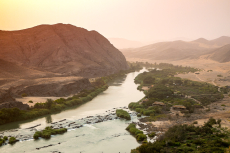 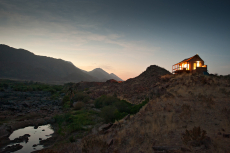