Change Language
Deutsch
Shipwreck Lodge Skeleton Coast
Accommodation
The Skeleton Coast is a special place. Rough, sometimes inhospitable, secluded and majestic, and for that very reason attractive. Shipwreck Lodge is the only lodge within the Skeleton Coast National Park. It is located a few hundred meters inland on the first sand dunes, but the sea is clearly visible and can be reached on foot in about 30 minutes.

Each of the 10 rooms have been constructed to resemble the shipwrecks that line the beach, slightly inclined in the sand and bracing itself against the stiff sea breeze. Large windows allow a clear view of the sand dunes and the sea. The cozy bedroom has wooden ceilings and a warming stove for the cold days. A dressing room with tea/coffee station connects to the bathroom, which is equipped with a double sink, shower, toilet and portholes. All rooms have a sofa, which can be used as an extra bed for a triple, or even as a double bed for families with two children.

The southern entrance of the park is located after mile 108 near the mouth of the Ugab River. If you want to enter the park from Damaraland, you have to go through Springbokwater Gate. You have to register in any case, but the permit is free of charge.

Access to the lodge is by light aircraft (charter) to Möwe Bay, followed by a road transfer to the lodge that takes about two hours. This is usually combined with a visit to the seal colony and various shipwrecks as part of a first afternoon activity.

If you are self-driving, please park your vehicle at Möwe Bay where a guide from the lodge will pick you up at 3pm. Only Self-Drivers who continue to Hoanib Valley Camp are allowed to bring their vehicle to to lodge in convoy with the camp's guide at 3pm. There are some deep sandy passages to master and confidence in driving is essential.

Activities
The Möwe Bay seal colony, the shipwrecks of Suiderkus and Karimona, as well as some rusted machinery from the time of the Westies diamond mine are visited on the way to the lodge. The most famous shipwrecks, Dunedin Star and Sir Charles Elliot, lie further north, but parts of the crashed Ventura Bomber, which was sent to rescue the crews, are still scattered on the beach.

Sundowner drives, quad bike trips and easy hikes are also available. An interesting excursion leads into the dry riverbed of the Hoarusib, which has formed a proper canyon. Impressive clay formations, the so-called Clay Castles, can be found in the side arms of the canyon and are worth exploring.
Good to know
The cold ocean currents from Antarctica (Benguela current) cause offshore trade winds that prevent rain over the mainland (similar to the Atacama Desert in Chile). This can lead to severe fog in the coastal region and complicate navigation for ships. Along the Skeleton Coast, fog is more frequent in the colder months from June to September than in the hot summer months from November to March. Activities at Shipwreck Lodge do not start until 9am or even a little later, as the fog often doesn't start to dissipate until around this time. So for once, you can spend the early morning hours in bed without feeling bad.
Your alternatives 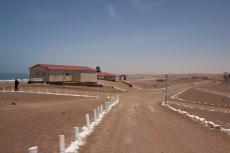