Change Language
Deutsch
Okonjima Bush Camp Otjiwarongo
Accommodation
Okonjima is run by the Hanssen family. Wayne, Donna and Rosalea Hanssen bought Okonjima from their parents, Val and Rose, in 1993 and turned the farm into a well-known conservation project.

Okonjima is the home of the AfriCat Foundation, a not-for-profit organisation dedicated to the rescue and preservation of Namibia’s big cat population. It has rescued over 1000 big cats since 1993 and released 86% of them back into the wild.

Okonjima Bush Camp is located 3 km from Plains Camp (the main camp) on the edge of the game reserve. This lodge offers a greater degree of comfort and is used by us as a fly-in safari destination for guests who wish to make a stopover here and learn more about the AfriCat Foundation.

Spaced a minimum of 80 metres apart, all eight chalets offer maximum privacy and a very generous 105 m2 of living space. The chalets are built in a traditional African style with clay walls and thatched roofs. The lodge also offers a swimming pool.

Location
Located 48 km south of Otjiwarongo, Okonjima sits 24 km west of the main highway at the end of a gravel road. It is the perfect place to break the journey between Etosha and Windhoek. Windhoek International Airport is some three hours away; Etosha National Park is approximately four hours away. Okonjima can also be reached by plane and is a popular destination on fly-in safaris as well.
Wildlife
Okonjima has its own 200 km² wildlife reserve which is home to cheetah, leopard, hyena, wild dog, zebra, wildebeest, giraffe, kudu, oryx, and various other species of antelope.
Activities
Several of the cats in the reserve are fitted with tracking collars, which makes them very easy to find. Leopard can therefore easily be encountered during game drives. Cheetah, wild dog and hyena can be tracked on foot during one of the bushwalks. There are three walks to choose from, varying in length from between 1.5 and 4 hours. Antelope often cross guests’ path and a climb up a small mountain is rewarded by fantastic panoramic views of the bush savannah’s sweeping plains stretching as far as Waterberg. 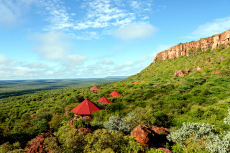 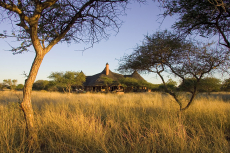 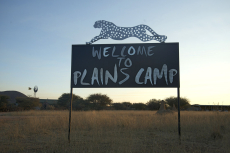 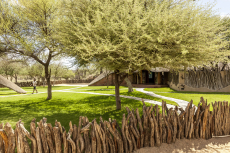