The main building houses a bar and wine cellar, a comfortable lounge with fireplace, a dining area, a small souvenir shop and a library brimming with fascinating reading material. Inviting guests to dive straight in, a large swimming pool forms the camp’s true central element.

Location
Mushara Lodge is situated approximately 10 km from the Von Lindequist Gate in Etosha National Park. Originally a farm belonging to the Pampa family, Mushara opened its doors to tourism in 1996. The company is still run by the same family, now offering a choice of four lodges.

The Etosha National Park is one of the most important nature reserves in southern Africa. It exists since 1907 and covers an area of 22,270 km². The central and eastern sections consist mainly of various silvery-white shining salt pans, which have made Etosha famous. In the dry season the park, the animals and the vehicles are covered in a whitish haze of salt dust.

On the southern shore of the huge Etosha Pan (130 x 50 km) there are several waterholes, which magically attract the animals from the surrounding area during the dry season. The three large state camps Okaukuejo, Halali and Namutoni connect Anderson's Gate in the south with the von Lindequist Gate in the east. The western part towards Galton Gate is much more wooded and less frequented by visitors, but it also offers less trails to drive around and find wildlife.

Etosha National Park is Namibia's premier safari destination. Covering almost the same area as Switzerland, Etosha is one of the largest national parks in Africa. To the west of the park lay the silvery white salt pans and adjoining waterholes, which magically attract all kinds of wildlife during the dry season.
Wildlife
Etosha is home to most of the big animals plus a remarkable number of antelopes and over 300 species of birds. Only the water loving buffalo and hippo are missing. From January to March, after the rainy season, the salt pans can be covered with water for a short time and pelicans and flamingos often come for a visit.
Activities
The camp offers game drives in Etosha National Park which can be booked on-site. Mushara does not offer excursions on it's own land. 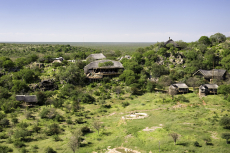 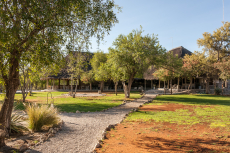 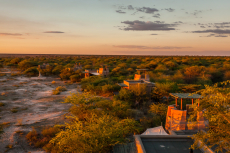 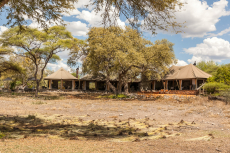 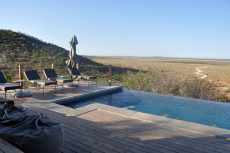 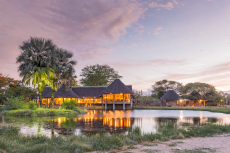 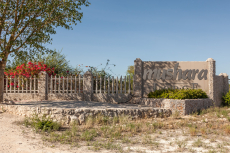 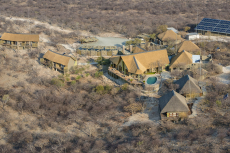 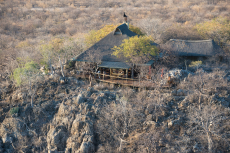 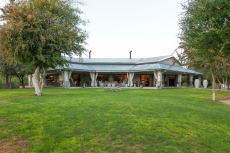 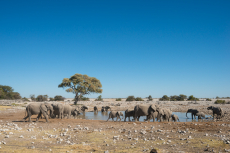 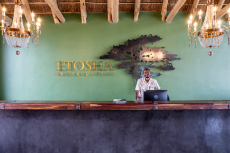 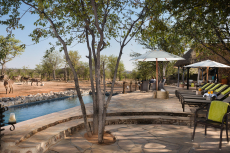