Magashi Camp Akagera National Park
Accommodation
Magashi Camp is small and personal six-tented camp with access to some of the most scenic savannah in east Africa. It is situated in the north-eastern part of Akagera overlooking Lake Rwanyakazinga.
Location
Akagera National Park sits on the north-eastern edge of Rwanda. It is the largest National Park in Rwanda and covers an area of 1'122km². It borders Tanzania and incorporates the Kagera River which feeds a myriad of smaller and larger lakes, channels and flood planes. The western side of the park is dominated by a mountain rage (highest point 2300m), wheras the northern part is rather flat with a good number of buffaloes, giraffes, zebras and antelopes roaming the savannah.

Akagera was founded in 1934. Sadly much of the park was re-allocated as farms to returning refugees following the Rwandan Civil War. As a result, in 1997 the park was reduced in size from more than 2,500km² (nearly 10% of the surface area of Rwanda) to its current extent of 1,122km².

Wildlife
On the remaining 1'122km² the elephant population is exceeding one hundred. Leopard, hyena, serval, jackal, giraffe, zebra, topi, impala, waterbuck, eland, roand are all present and there is a good nunmber of buffalo. There is a high concentration of hippo and crocodiles in the lakes. More than 500 bird specias are reported. Of special interest to birders are the rare Papyrus Gonolek and the Shoebill that live in the papyrus swamps.

SANParks who run Akagera have reintroduced lions and some black rhinos. This has lifted Akagera into the league of Big-5 parks. 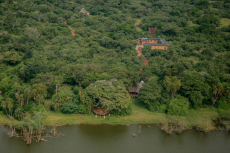