The new Strand Hotel has set a new standard in Swakopmund. Uniquely located on the iconic and historic Swakopmund Mole and surrounded on three sides by the Southern Atlantic Ocean its 125 rooms and suites make this hotel one of the larger ones in town, but of those certainly the one with the best seaside location. All rooms have tea & coffee stations, mini-bars, hair-dryers, TV’s, free Wi-Fi Internet access, telephones and air-conditioning.

The Strand Hotel offers its residential guests and all casual visitors three exciting restaurants. The Farmhouse Deli is good for coffee, cake, sandwiches and fresh salads. The Brewer & Butcher welcomes beer and meat lovers. The Ocean Cellar caters for guests who prefer seafood, sushi, oyster and a glass of fine white wine.

The Strand Hotel is destined to become the social epicenter of Swakopmund for locals and tourists alike.

Location
The Strand Hotel is centrally located directly at the beach and close to the light house. If you want to swim in the ocean be warned, the water is very refreshing due to the cold Benguela current. However you may see some brave local on his surfboard and of course the kids who play in the shallow water during the warmer summer months.
Read more here

Your private guide expects you
You will spend the next days with a professional, dedicated guide. He will be happy to answer all your questions about fauna and flora, culture and way of life of the locals and history of the country. The 4 x 4 vehicles (Toyota Land Cruiser) offer enough space, have large sliding windows and of course a refrigerator for drinks and food.
2 nights Ozondjou Trails Camp Brandberg

The Ozondjou Trails Camp is situated close to the Ugab riverbed. Ozondjou is the Herero word for elephants and this is very fitting, as they are utilising a site close to the base camp of the Elephant Human Relations Aid (EHRA). The camp will not only benefit EHRA financially, but a portion of the income also goes to local farmers in the area.

Ozondjou has five twin tents. Each tent has twin beds, an en-suite shower, wash basin and flush toilet. The main area consists of a mess tent with lounge area, dining table, that leads out to an outside sitting area at the firepit with a view over the Ugab River..

Location
Ozondjou Trails is accessible via the C35 road, which is the main road connecting Swakopmund and Twyfelfontein. It is about 4 km away of the main road in the beautiful Damaraland Region.
Read more here
2 nights Damaraland, Camping

Damaraland is one of Namibia’s most fascinating and beautiful regions. It is situated north of the Swakopmund – Windhoek line (Erongo), and south of Kaokoland (Kunene). Its interior is characterised by table mountains, hills and canyons.

We drive south of Namibia’s highest mountain, the Königsberg (2606 m), situated in the Brandberg Massive and enter desert elephant country when crossing the Ugab River which is one of the main rivers in Damaraland. The second major river, the Huab River, will be the area to explore and set up camp for the night. Both rivers are seasonal rivers that only carry water after rains.

The Skeleton Coast is a special place. Rough, sometimes inhospitable, but attractive to many because of its inaccessability and solitude. Shipwreck Lodge is unique in its kind and the only lodge inside Skeleton Coast National Park.

Each of the 10 rooms have been constructed to resemble the shipwrecks that line the beach. There are eight twin or double rooms, and two family tents, all en-suite and solar-powered. A wood burning stove will keep the room warm in the chilly evenings and mornings.

In the centre of camp, you’ll find an equally as innovatively-designed lounge and restaurant with a wide, wraparound deck and uninterrupted views across the sand, all the way to the Atlantic Ocean.

The southern entrance to the park is located after mile 108 near the Ugab river mouth. A permit is needed to enter the park. Most visitors leave the park via the Springbokwater gate on their way to Damaraland.

Self-Drivers need to park the vehicle at Moewe Bay and will be transferred to the lodge at around 3pm. It is around 8 hours drive from Swakopmund, and 3 hours from Damaraland Camp.

Engo Valley is a mysterious place on the route between Purros and Serra Cafema. The track hits the border of Skeleton Coast Park and leads north right between the vast sand dunes and the foothills of the Hartmann mountains. The road is partially blocked by sand dunes, but this does not pose any problem for our vehicles.

The endless, yellow-colored dunes of the desert stretch from Swakopmund along the Skeleton Coast all the way up to Angola. Once the temperatures drop during the night, the fog drifts from the ocean across the sand dunes and covers the land with a heavy, gray veil. However the first rays of the sun in the morning dissolve the fog and push it back to the ocean, a beautiful spectacle. Get up early and climb a rock for the views!

Hartmann Valley lies in the far north of Namibia and extends for many kilometers from south to north until the valley suddenly drops very steeply into the riverbed of the Kunene in a truly spectacular manner. The Kunene forms the border with Angola.

Guests who had the opportunity to stand at the very top of the abyss and look over the wide dunes, the rugged mountains and the green belt of plants that form the Kunene riverbed, will never forget the view.

The valley, the mountains and various other localities in the area are named after Georg Hartmann (1865-1946), who explored the area at the turn of the century. At the bottom of the valley sits Serra Cafema Camp, an oasis of luxury in the barren infinity of the Kaokoveld.

We follow Hartmann Valley in southernly direction and admire the beauty of the landscape. Once we pass red drum, an important way sign, we are heading straight for Onjuva and Orupembe where we hit the dry Khumib River.The Khumib River is the northernmost and smallest of the dry rivers in the Kaokoveld. The river does not carry water during the dry season, but it can swell considerably after rainfall.

To get to Purros we keep driving in the Khumib Valley, pass Himba Spinx Mountain and then follow the dry Hoarusib River to Purros.

Perched on a hill with views over the desert village of Purros, the airy and extremely elegant Okahirongo Elephant Lodge opened in the summer of 2006. The main building is spacious and open-plan, yet still offers guests intimacy and privacy with its selection of lounge areas, including the library with its spectacular views. The large swimming pool invites guests to cool down in the heat of the day.

The lodge’s rooms (5 double, 2 twin) are each equipped with an en-suite bathroom and an indoor and outdoor shower. Laze and gaze at the endless expanse of the Hoarusib River valley from the comfort of your own sala (daybed). The Presidential Suite offers enough space for families, and comes with two double rooms and a private lounge.

Location
Okahirongo Elephant Lodge sits on the Hoarusib River close to the village of Purros, approximately 200 km south of the Kunene River, and 50 km inland from the Skeleton Coast in the rugged Kaokoveld region. Kaokoveld is considered to be one of Africa’s last remaining true wilderness regions, and is also home to the Himba, a semi-nomadic pastoral tribe. The landscape is characterised by the broad Hoarusib River valley, which, surrounded by bizarre craggy outcrops and desert plains, is reminiscent of a lunar surface.
Read more here

Hoanib Valley Camp is a new camp in the Hoanib Valley. It offers six tents with en-suite bathrooms, indoor & outdoor shower and a shaded outdoor lounge. One of the tents is larger and is used for families.

The six guest tents blend almost perfectly into the rugged environment. The colours, textures and patterns are inspired by the experience of the Hoanib; the rich ochre of the dunes, the geometric patterns of the Himba people and, of course, the giraffe that inspired the project.

The camp is a joint venture with the local community and with the NGO the Giraffe Conservation Foundation (GCF).

Location
Hoanib Valley Camp is located in the Sesfontein Community Conservancy and can be reached by vehicle from Sesfontein. The camp sits on the banks of the Obias River, just outside the private 500 square kilometre Palmwag Concession, and overlooks the ephemeral Hoanib River.

The area is part of the Kaokoveld, a land of rugged scenery, mountains, vast plains, and dry riverbeds inhabited by incredible desert-adapted plant and animal life.

Self-Drivers can either drive to the camp from Sesfontein (4 x 4 required) or leave the vehcile at Sesfontein at a secure parking. The camp organizes transfers, leaving Sesfontein at 3pm and departing from camp at 09 am.

Flights are planned from Windhoek to Fort Sesfontein, and down to Shipwreck Lodge.

The ten en-suite guest tents and main tented area is built under shady Mopane trees, typical of the Damaraland region, with spectacular views onto a set of granite “koppies” close by. Malansrus provides the ideal overnight facility for the guests seeking the adventure of a tented camp without sacrificing luxury.

The tents are located well apart to ensure privacy, however, are still within comfortable walking access to the main facilities of the camp. The camp provides accommodation in ten twin tents (43m2), each with a fully enclosed living environment, en-suite shower, wash basin and flush toilet in a separate room, freestanding fans and limited 220V electricity.

The main area consists of a large modern stylish mess tent with lounge and small bar area. The dining area leads out to an outside shaded patio area and a fire pit.

Location
The Malansrus Tented Camp is situated about 16km east of Twyfelfontein. Being located on the banks of a sidearm of the Aba Huab River, Malansrus offers easy access to the main sites and highlights of the Twyfelfontein area.
Read more here 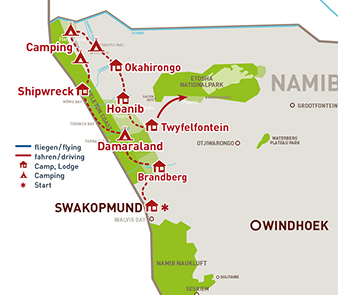 Learn more about these areas
Kaokoveld 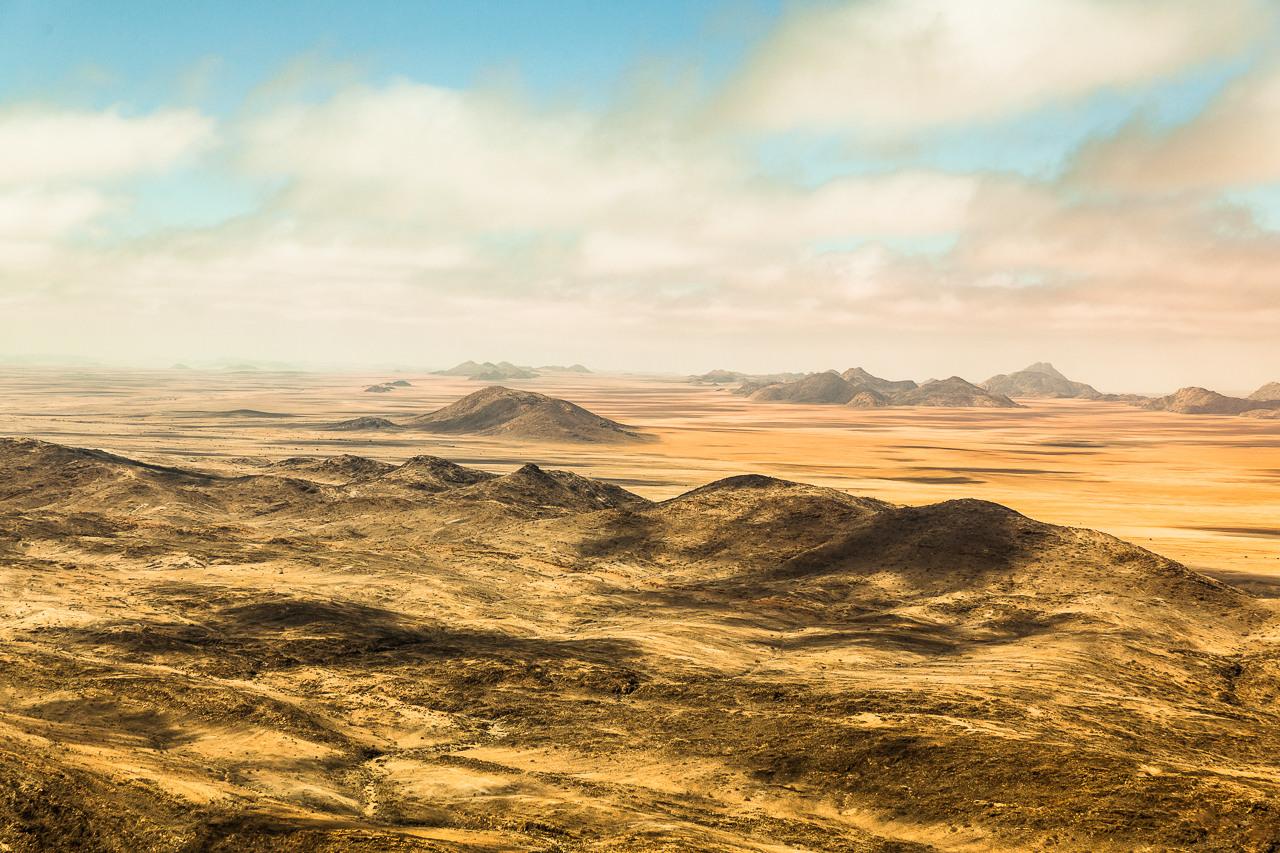 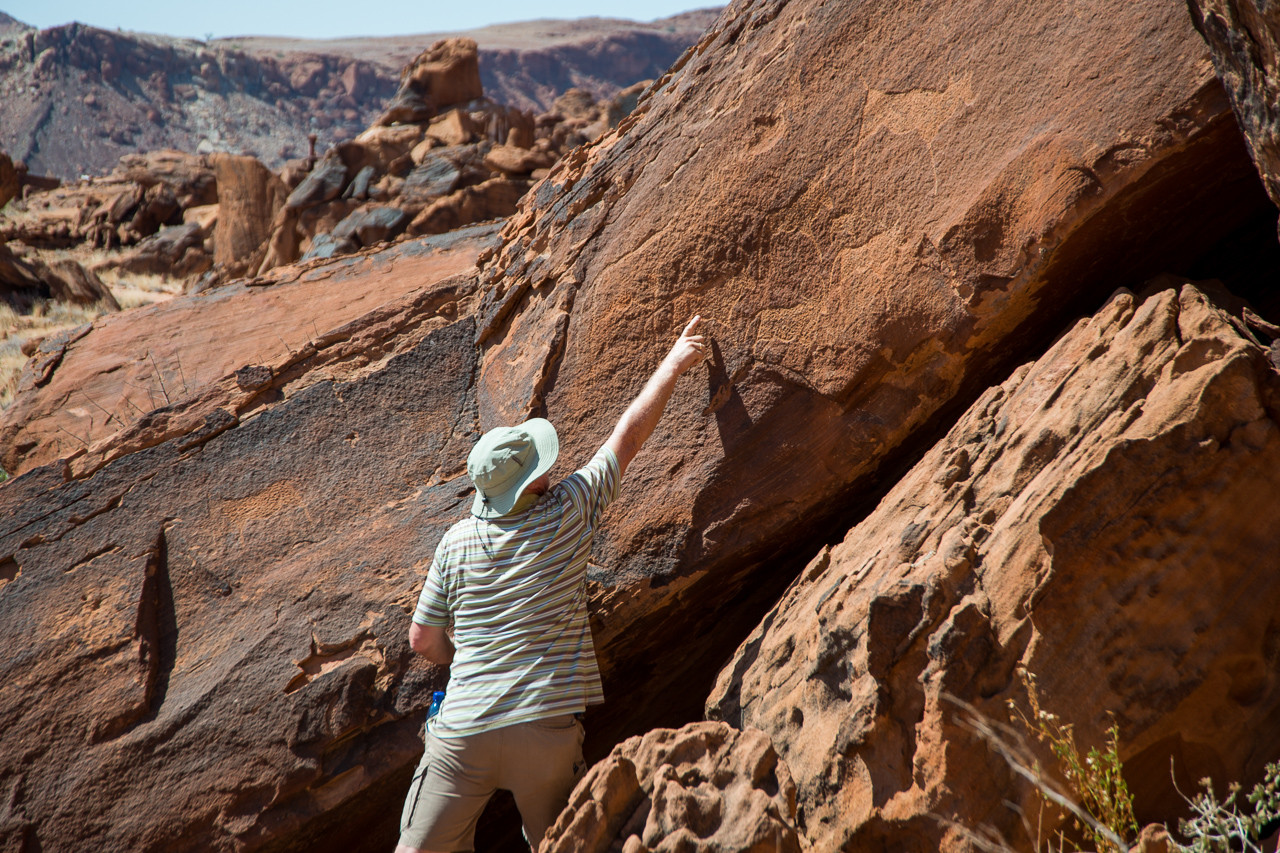 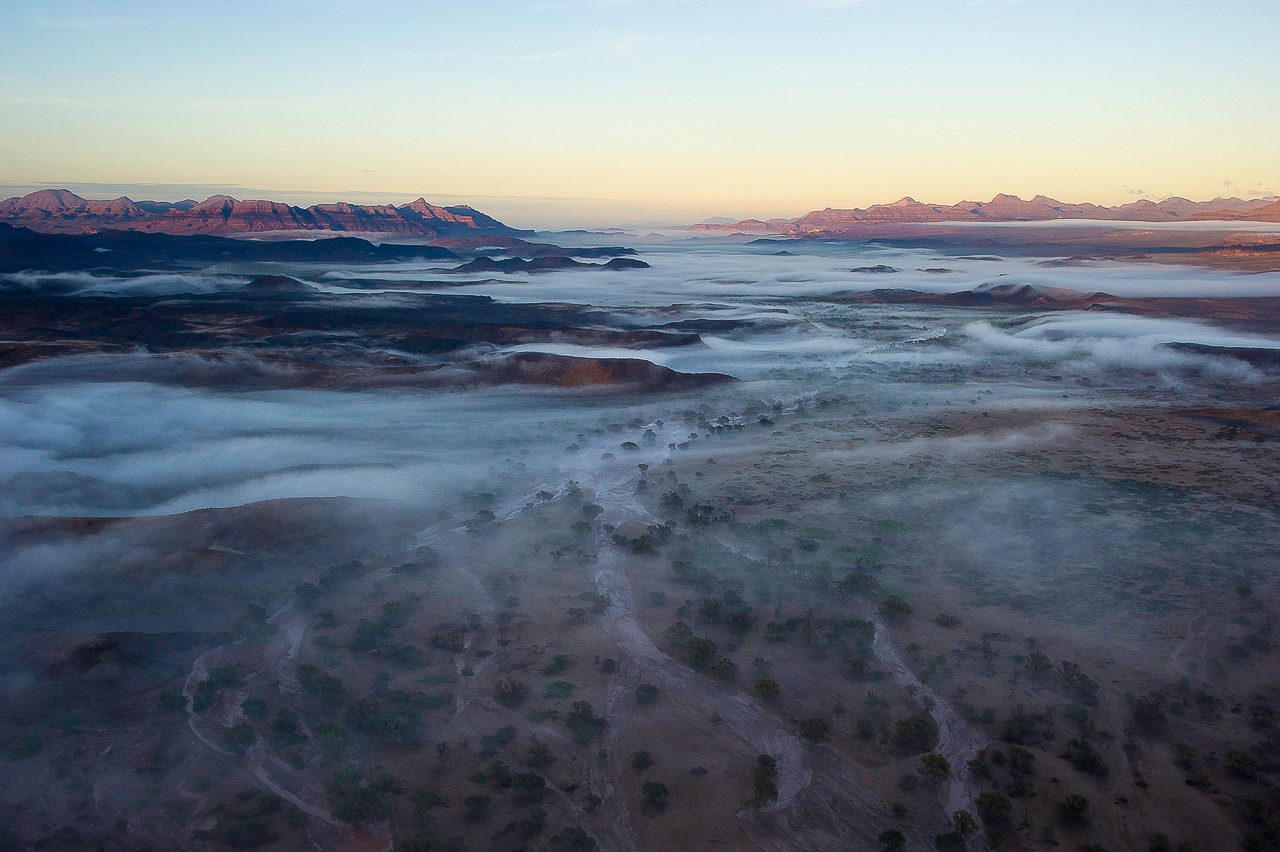 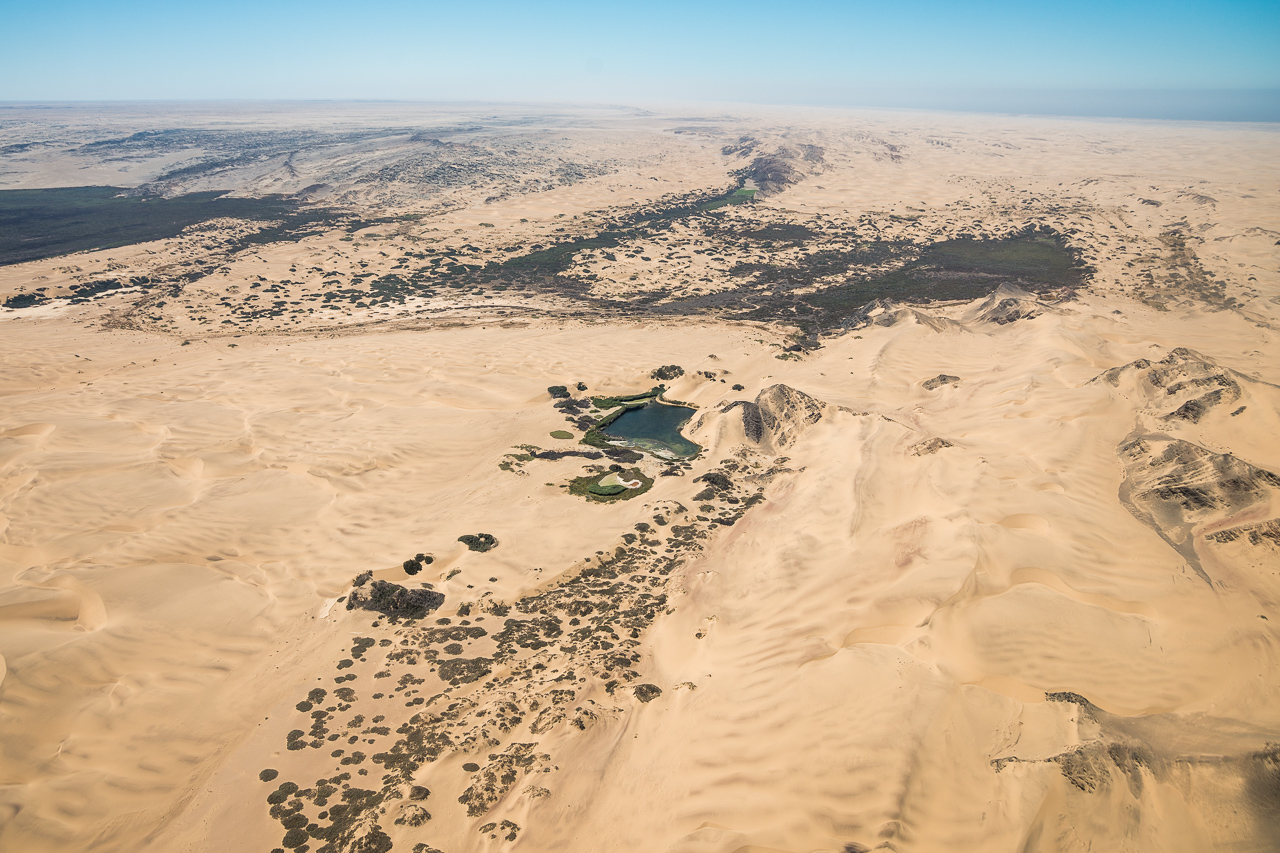